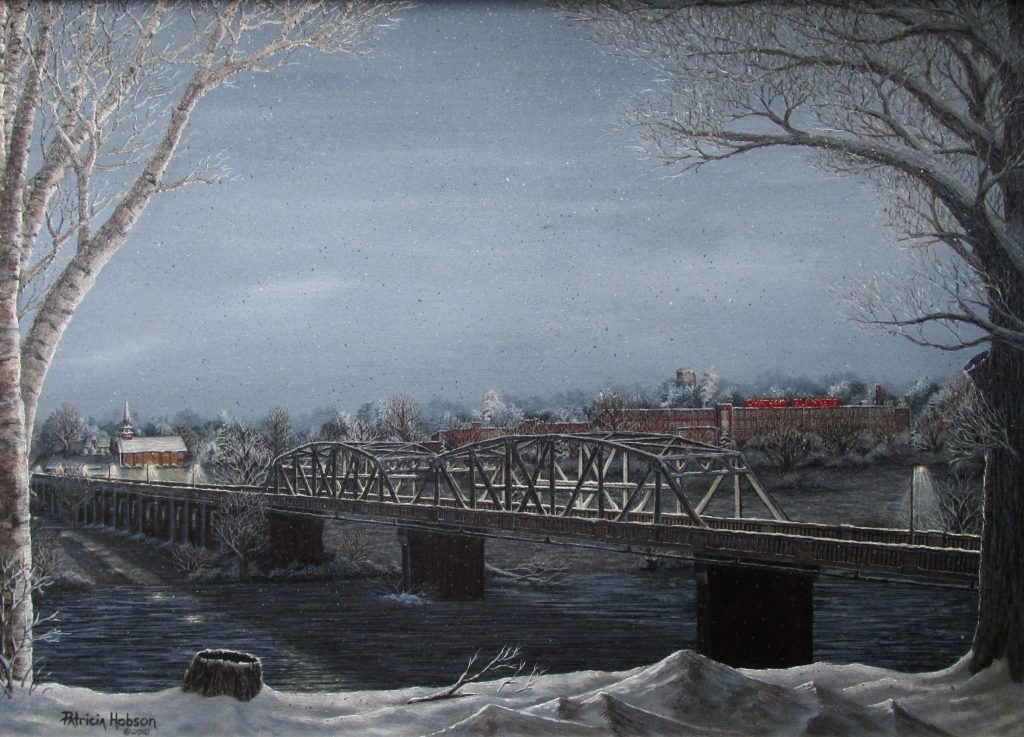 All about this Winter Art Print  “A Chatham Blanket Evening”

I realize that this winter art print was conceived to be all about the “Hugh Chatham Bridge” that was demolished in 2010.  But, as I was researching and painting this, it became much more than just the bridge.  So, I would like to share some of the things that have come together over the years to make this scene so important.

First, let me tell you about the Chatham Manufacturing co. an American textile manufacturer that made the famous Chatham Blanket featured to the right in the background. The company was established in the 1860’s by Alexander Chatham & Thomas L Gwyn.  In 1890 the Yadkin Valley railroad line was completed in Elkin.  This made shipping and receiving goods much easier leading to the company being enlarged and renamed Elkin Mills.  In 1894 the company was renamed Chatham Manufacturing.

During the early 1900’s the primary focus of the company was blankets.  Then in the 1930’s with the automotive industry flourishing, they started to produce automobile upholstery.

In the 1960’s, Chatham Mfg. Co. invented the process of making fiber woven blankets.  This was a process of looping and matting a web of fabrics together to form a fabric quite similar to felt but thicker.  The first two fibro weaving machines replaced over 100 conventional looms and increased their output of blankets by 50%.  This new process made Chatham blankets relatively cheep to produce; therefore, reducing the retail price substantially.

The Chatham family & senior management of the company were out bid by a Danish textile firm called “Northern Feather” in 1988.  This sale ended the 100 year Chatham Family reign over the Co.  Soon after the sale, Northern Feather went bankrupt and was sold to a South Carolina company “CMI Industeries” in 1992.  Eight yrs. later “Interface Inc.” of Atlanta Georgia would purchase Chatham Manufacturing.

Notice in the painting the trees are a bit smaller than today. I chose to do the painting as things looked in 1955 when the trees would have been smaller.  The smaller growth of trees gives a much better view of the Chatham plant during its better years.

By doing the painting at this early date, the First Baptist Church had just relocated to it’s new location at the Elkin end of the bridge.  The chapel would not be in the picture; because, it was added later.

And now we get to the bridge.  In 1871, before the Hugh Chatham bridge, a covered bridge over the Yadkin River connected the towns of Jonesville and Elkin.  This was one of the first and longest suspension bridges “in the world.”  It was privately financed and a toll of 5 cents was charged for crossing.  Surry and Yadkin counties later took over the management of the bridge.  The toll was then done away with.  A steel and wood bridge would later replace this covered bridge.  But, just 3 years later, it was washed away in the flood of 1916.  Then, in 1917, the bridge was replaced with a single lane steel and wood bridge that was used until it was replaced in 1970 by a 4 lane bridge.

Finally, in 1931, the “Hugh G. Chatham Bridge” was built down stream.  It was to reduce congestion crossing the the single lane bridge and the streets of downtown Elkin as well as the wait for the train.  The new bridge crossed over the train track.  This was a great relief for the employees coming and going from Yadkin Co. to the Chatham plant.  The bridge quickly became a symbol of progress and pride for both the towns of Jonesville and Elkin.  It has been crossed 1000’s of times by people coming and going from work at the Chatham plant.

Just imagine the historic sight of crossing into Elkin in the early morning hours just before sunrise and seeing the neon red Chatham Blanket sign glowing above the company where you are going to work.

Now, I can only hope that this winter art print can spark such memories and keep them alive.  Because, unfortunately, like so many other historical structures, this bridge did not pass inspection in 2005 and was demolished in 2010.