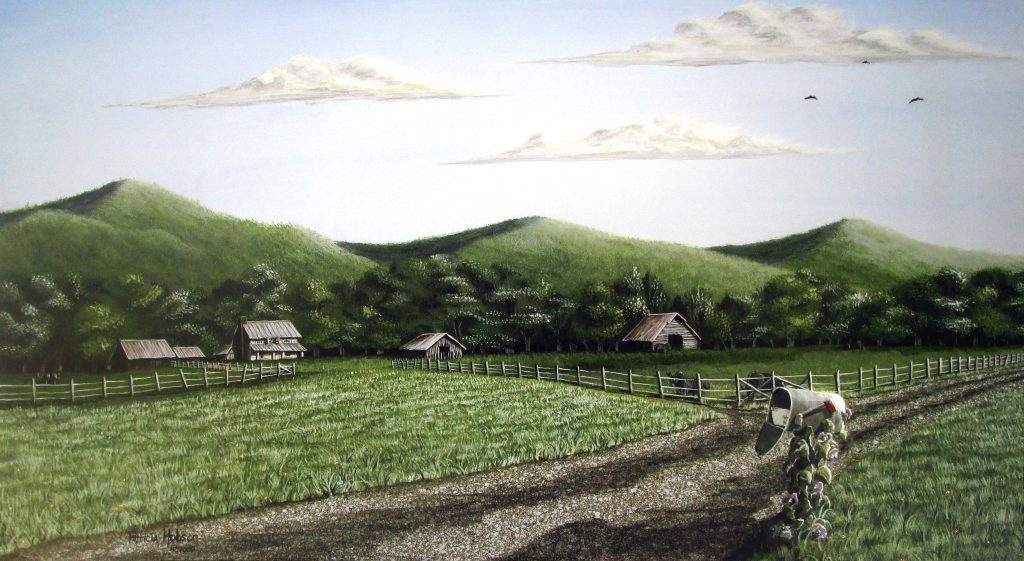 Some thoughts about this summer art print called “The Letter”

This summer art print gives me a chance to tell you a little bit about my life growing up in the South. The feature of this print is an open mail box at the driveway of a farm at the base of the Brushy Mountains here in North Carolina. Some areas around where I live are still so beautifully rural. There are roads where you can drive on a Sunday afternoon and still view the countryside as it looked fifty years ago. You will see small farms with crops growing tall and the cattle fat from the lush grasses of the hot summer days. Most of the farm houses are built of white washed clapboard siding with porches front and back shaded by huge oak and or maple trees. Usually the back porch was just off the kitchen and screened in. It’s where women would sit in the summer stringing beans, shelling peas and preparing vegetables of all kinds to be canned and dried for the winter meals. Southern women have a knack for making delicious meals with the simplest things.

The evenings on those hot summer nights would be spent sitting out on these screened porches watching the fireflies and sharing stories of the day. I can clearly remember these times. My Maw Maw and Papa Brandon lived on one of these farms. Their house was so far out from everything that the closest house from them belonged to my aunt Ruth and her family. It was another mile to the next house from hers. In the summer I would spend a lot of time with them. There were nights that were so hot and humid that even open windows with fans were of little relief. We would pull mattresses out onto the Porch and sleep there for the night. I would lie there looking at the stars and the fireflies while listening to the crickets, dry-flies and bull frogs down at the pond. Every once and a while a gentle breeze would tickle through your hair giving just a brief bit of relief from the heat. Then, before you know it, the sun would be peaking just above the trees. Oh, the mornings would always begin with a big delicious breakfast of eggs, homemade butter and jelly on toast and country ham with red eye gravy. The eggs were fresh from the farm. And, the country ham was harvested by my Papa and cured by my Maw Maw. The days were filled with hard work on the farm raising the crops and caring for the animals. My grand parents were tobacco and beef farmers.

It has been said more than once that no one knows what hard work really is until they have spent a long morning in the fields “Taking First Primers” which was the job of pulling the first ripe leaves from the tobacco plants. Tobacco harvesting would begin just after the first light so the leaves could be harvested and the men could get back to the barn before the hottest part of the day. The goal for each day was to harvest enough of the leaves to fill a tobacco barn for curing. 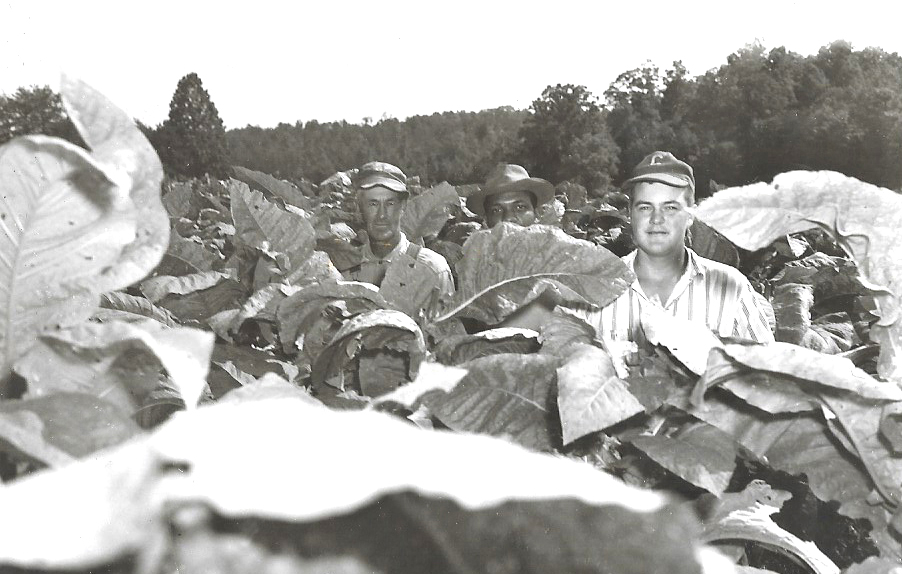 This picture, taken in 1963, is of my Papa, on the left, cousin Ted, on the right, and a man who worked for Papa during the tobacco season, center. It was taken in 1963. By the way they are standing up in this pic. So, just imagine break is over bend over and keep priming.

So, the job of pulling these first leaves consist of walking down the long rows of tall thick tobacco plants bent over pulling off the first ripe leaves of each plant. Those leaves were the ones just above the ground. Each hand full would be added to the others under the other arm until you could hold no more. You would stop priming to take your arm load and put it in a sled that was a row or two over and pulled by a mule. Then, it’s back to your row, bend over and do this again and again till all the ripe leaves had been taken. When the day begins, the plants are dripping wet with dew which in turn makes your clothes soaking wet. If that’s not bad enough, as the day heats up the sticky gum from the plants starts accumulating on your clothes, arms and hands till your fingers are sticking together. So, there you are walking bent over with dripping wet clothes, covered in sticky tobacco gum and sweating as the sun gets hotter and hotter. Sounds like fun. Right?

While the men are in the fields, the kids are at the barn bunching the leaves, usually three or four at a time, and handing them to the women who were tying the bunches onto sticks with string. As the men are finished in the fields, they come to the barn and enjoy a break usually with a RC Cola, a Lance nab and a Moon Pie. When the break is over, some of the men climb up into the top of the barn and hang the sticks of tobacco there as the other men carry them in and hand them up. Once the barn is full, it’s time to finish the day caring for the animals having a nice cool bath and sitting down to a delicious home cooked meal. After supper, it’s back to the porch for a while and then to bed where ever that may be for the night. This summer art print is my way of sharing my experiences of life in the south.

Now, about that letter. Back in the 1960’s, when all this farming was going on, there were no computers or email. Some folks still didn’t have telephones or TVs. So, most communications were done by actually writing a letter with pen and paper, stuffing it into an addressed envelope, licking the back of a stamp and sticking it to the upper right side of the envelope. Then it was off to put it in the mail box and pull up the little red flag to let the mailman know there was something in the box to be picked up. Later in the day, someone in the family would run to the box in hopes there would be letters there for them. It took more effort and the process was slow. But, what a feeling it was to find a letter in the box for you!

Young people these days will never know the thrill of sending and especially receiving a letter in that mailbox. Maybe you are as fortunate as me in having had that experience.

This summer art print will put a bit of country on any wall of your home or office.