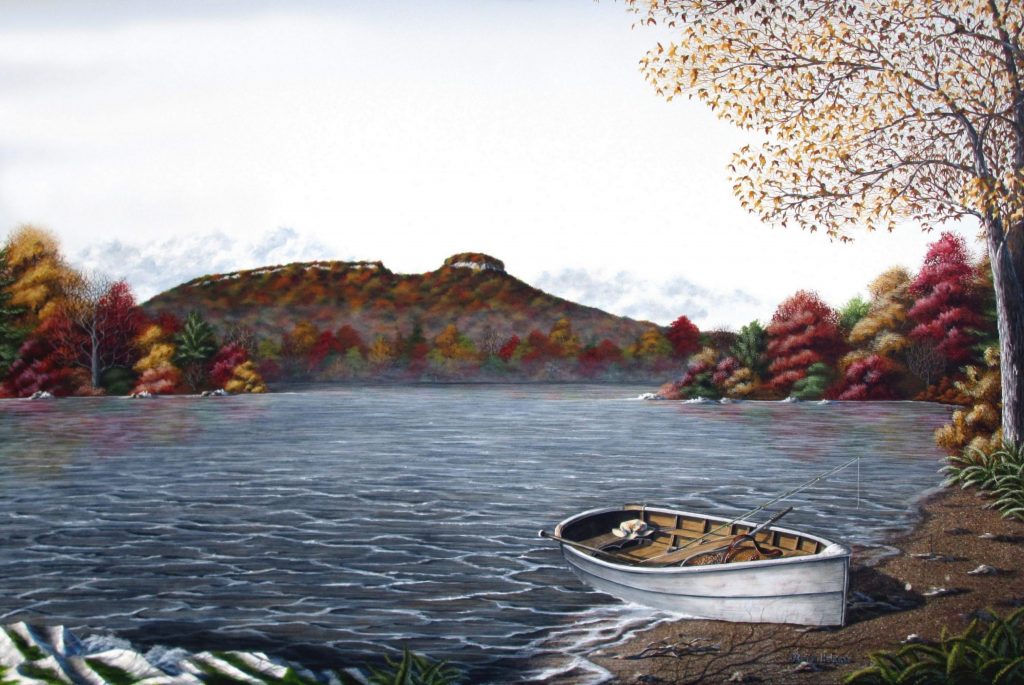 All About the Print and How the Majestic Yadkin River Flows by Pilot Mountain, North Carolina

While contemplating the subject matter for a fall print, it occurred to me that the majestic Yadkin River flows by Pilot Mountain, North Carolina and had rarely if ever been featured in a limited edition print.  At the same time, I remembered seeing a photograph several years ago that someone had taken of Pilot Mountain as seen from the Yadkin river.

After deciding that this is what I wanted to paint, I ask a friend, who is very familiar with the river, to take me to the location where I could photograph this scene. I had no idea that we would have to actually go down the river in a row boat.

As my adventure began, we put the boat out on the river on a Sunday morning in the early spring.  Needless to say, I was a bit nervous since I had never been in a row boat.

This was a journey I will never forget.  Except for an occasional airplane flying over and an old man fishing on the river bank, there were no other signs of human life.  We saw geese and ducks with their spring babies enjoying a swim and turtles sunning on the rocks.  I could only imagine a more relaxing place to be that morning.  After about thirty minutes, we rounded the river bend and could look back and see Pilot Mountain appearing on the horizon at the river bend. This was the perfect picture.

In doing my research for this piece, I realized just how important the Yadkin River is. From its beginning in western Wilkes county, North Carolina it flows on along the Surry/Yadkin Co. line and makes a southern turn flowing through six more counties.  As the river moves into Stanley County, South Carolina the name changes to Pee Dee River.  After flowing through six South Carolina counties it empties into the Atlantic Ocean in Horry County SC.

From farming, industry, personal and recreation aspects the Yadkin River touches hundreds of thousands of lives; therefore, the need for its conservation has never been greater.

This limited edition art print will definitely make a majestic statement on any wall of your home or office.