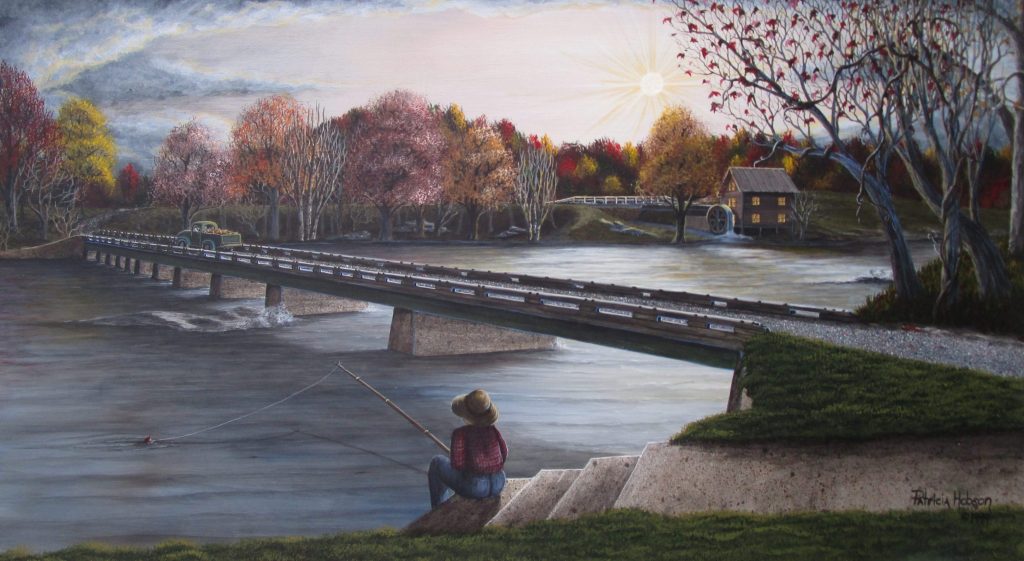 About “The Rockford Bridge” at Rockford, North Carolina

The historical Rockford, North Carolina low water bridge was demolished in the year 2003.  But, I refused to let it’s memory fade.  The bridge, which crossed the Yadkin River connecting Surry and Yadkin counties here in North Carolina, was beloved by many natives of the area and tourist for years.  Now, the bridge has become, merely, a piece of history.  I painted this rendition of the bridge in order to preserve it’s memory.  Prior to the bridge being built, the only way to cross the river was by ferry.

This scene encompasses a view of the Rockford bridge from the Surry County side looking across the river toward the Bohanon Mill that once stood on the edge of the river on the Yadkin County side.  The old mill burned to the ground in the early 1970’s.  Rumor has it that at the time a group of “hippies” were squatting there and possibly left some candles burning or turned over an old kerosene lantern causing the demise of the mill.  While doing research, I learned that the Bohanon family who built the mill were distant relatives of my family on my Mother’s side.   At the time I was creating this painting, the mill had been gone for several years.  Using pictures loaned to me by the historical society I pictured the mill in an attempt to remind people of how things truly used to be.

The village of Rockford, North Carolina was founded in 1790 to be the county seat of Surry county after Surry was split from Stokes county.  When the southern portion of Surry county south of the Yadkin River was broken off to establish Yadkin county, the county government was then moved to Dobson, NC in the north.

Ferries shuttled people across the Yadkin River at Rockford until a piano salesman built a bridge and charged a quarter to cross.  Floods of the 1930’s swept the bridge away.  In 1962 the low water bridge featured in this painting was built.  The bridge served the citizens of Surry and Yadkin Counties until a new high rise bridge was build and dedicated in 2002.  Di-spite all the attempts of the community to save the bridge, the Rockford low water bridge was demolished.

I highly recommend that anyone coming to this area take the time to stop by the little village of
Rockford, NC.  A lot of the original old buildings are still there including the old courthouse, the post office, the old Railroad station and of course the old Rockford General Store. For those traveling in our area, Rockford is a great place to visit. Walking through the door of the General Store is just like stepping one hundred years back in time. Like me, when my kids were small, they loved going to what they called the candy store. When you walk in the store, straight ahead is a warm old pot belly stove. Then to the left is an old timey, long wooden and glass counter with each bin filled to the brim with “CANDY.”  So many candies that you can’t find at just any store are ready to melt in your mouth. It’s a great place to visit and step back in time for a wonderful experience.

When you are planning to be in our area, please feel free to give me a call and to set up a visit with me at my studio / Gallery. Since I have been in a wheel chair, I am not always at my gallery with my husband when the shop is open. But, If you are going to be there, I’ll be there too!

This print would be a wonderful piece of history to add to the décor of your home or office.

I also have another print of Rockford available that features the Old Rockford General Store.

Click on the image below to to see the print and the Great Sale Price for It during the month of March.